skip to main | skip to sidebar

It would be difficult for anyone following world news today not to know the ravages of war and insurrection that plagues much of Africa. From the feloneous emails to the kidnapped school children, Nigeria has gained international noteriety for all the wrong reasons. But let the blame not fall on its footballers.
When the raveges of war struck Germany in the late 1930's, football became the least respected of the Nazi regime. The German's takeover and annexation of neighboring Austria was a disaster not only for the Austrians (who qualified for the 1938 World Cup), but the German National Team as well.
Several star players and clubs were also inducted under Germany's Federation. Although not the best goalkeeper in squad, Rapid Vienna's Rudolf Raftl was drafted to play between the posts for Germany in 1938 World Cup.  It proved to be a downfall for the "master race" and plummeted the sport even farther on the Third Reich's favor list. But German soccer survived to become the top league in the World and go on to win 3 FIFA Championships. 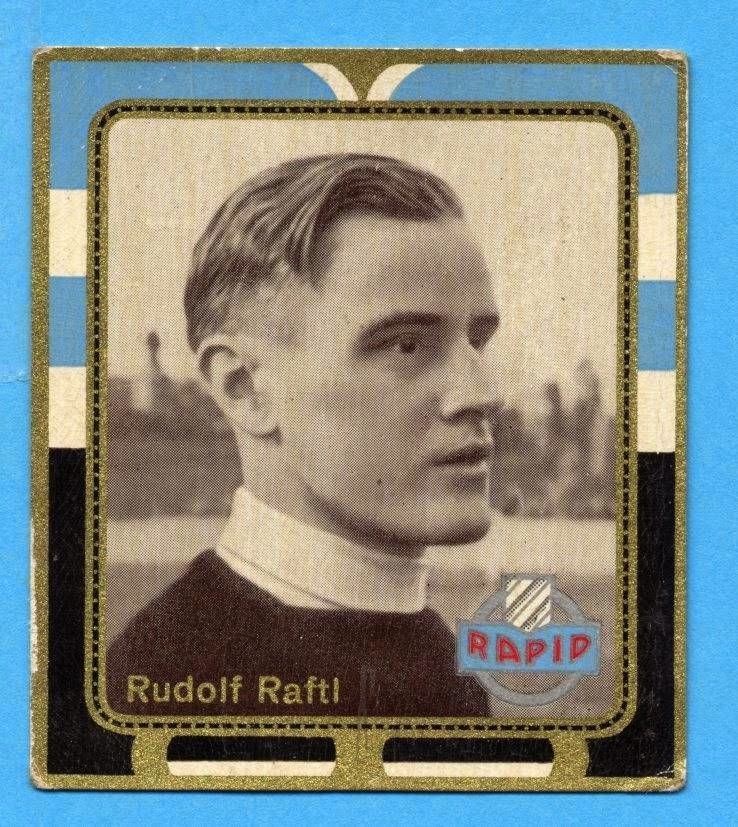 (photo - International Soccer Archives)
Austrian player on a 1938 German Cigarette card
However, not all dictators had negative results from the militarization of their football. Italy's Benito Mussolini heralded the nation's back to back FIFA Championships in 1934 and 1938.  However, the keepers of the game made certain separations that ensured that the sport survived, albiet with intermitten decades of corruption. 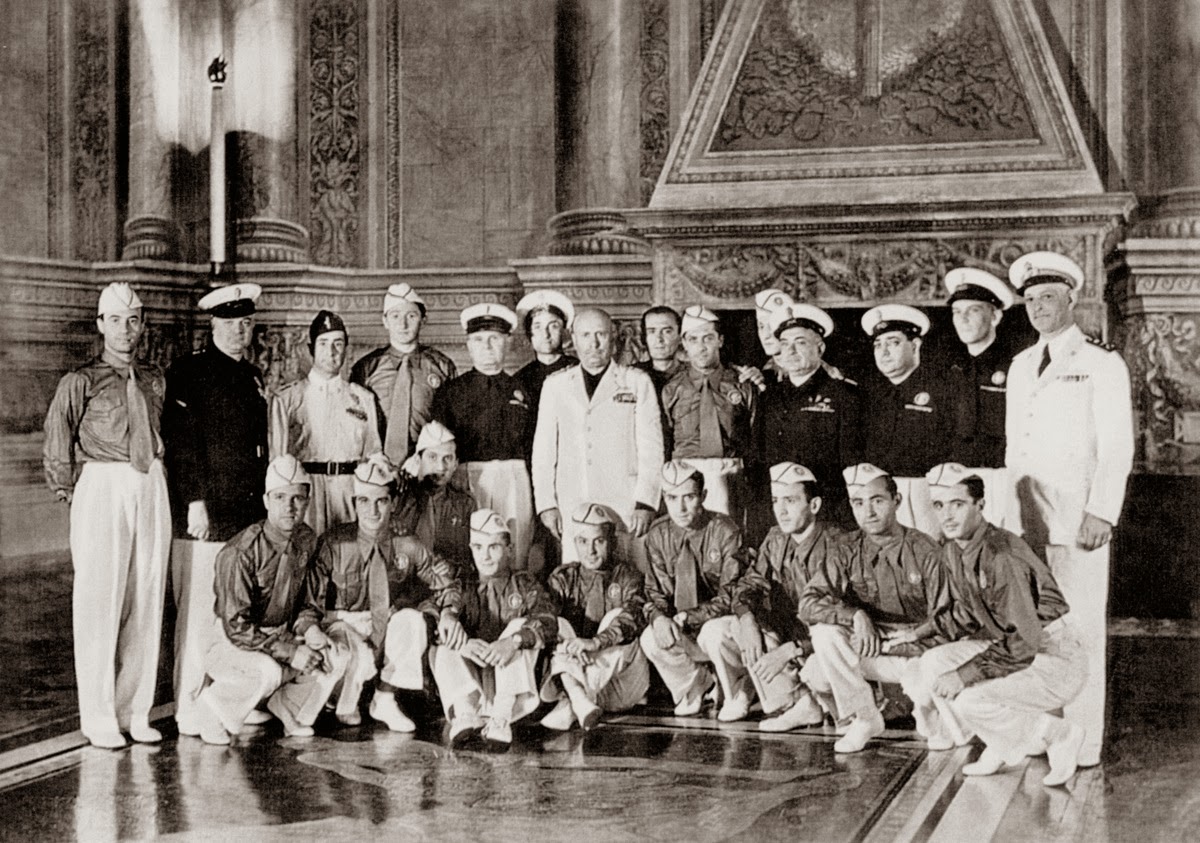 (photo - International Soccer Archives)
The 1938 FIFA Champions pose with Mussolini in full military dress
Nigeria, who has played more matches in The USA than any other African Nation, enjoyed its glory days in the mid-1990's with successive appearences at the 1994 World Cup, the 1995 US Cup and the 1996 Summer Olympics in America. They won their greatest title as Gold Medalist at the Atlanta Games. 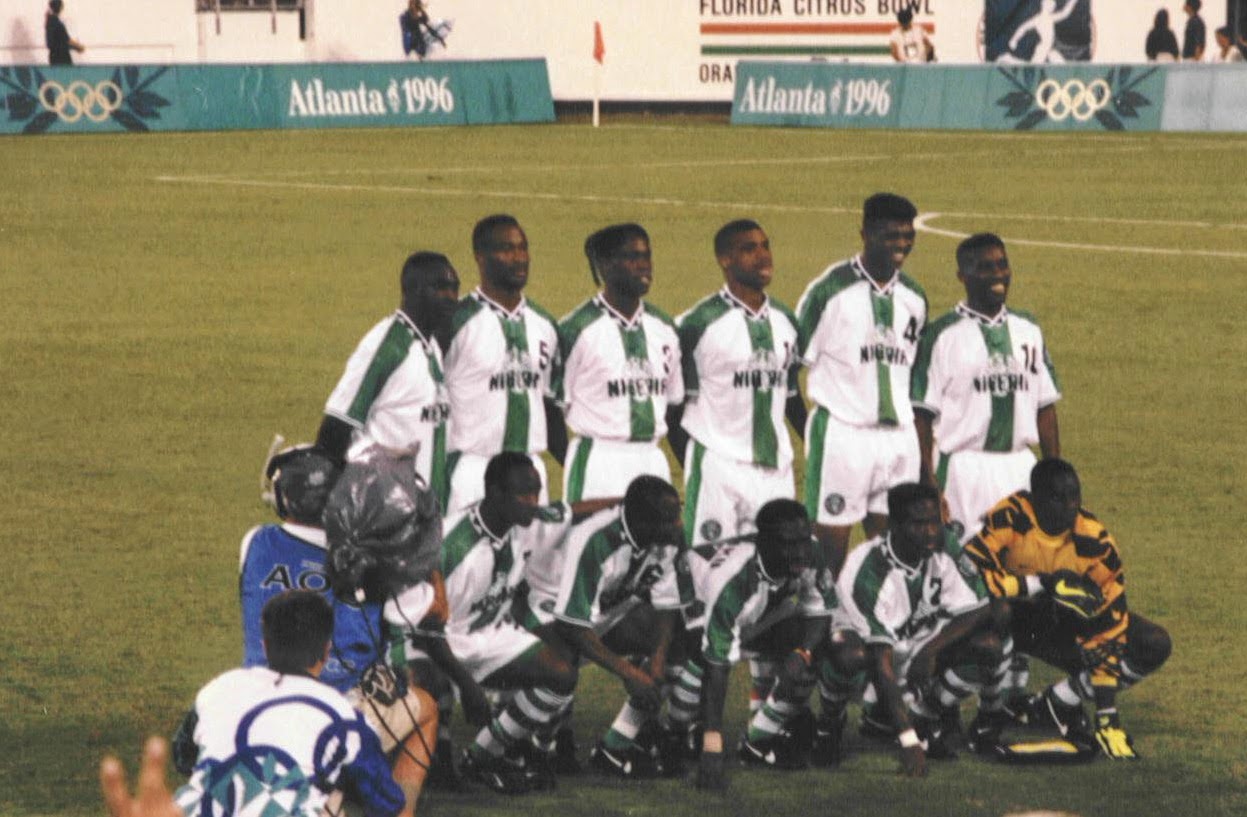 (photo - Chuck Zsolnai - I.S.A.)
1996 Olympic Gold Medal Winners
Predictions of being crowned FIFA Champions and producing the world's greatest players have fallen short all too often. The corruption and governmental interfarence have been addressed by FIFA on more than one occasion.
Nigeria prepares to meet the US National Team in Jacksonville, Florida this week. Both squads will make the jump to Brazil for the FIFA competition afterwards.  What remains to be seen is the talent and drive that may overcome the political influences to achive football success. 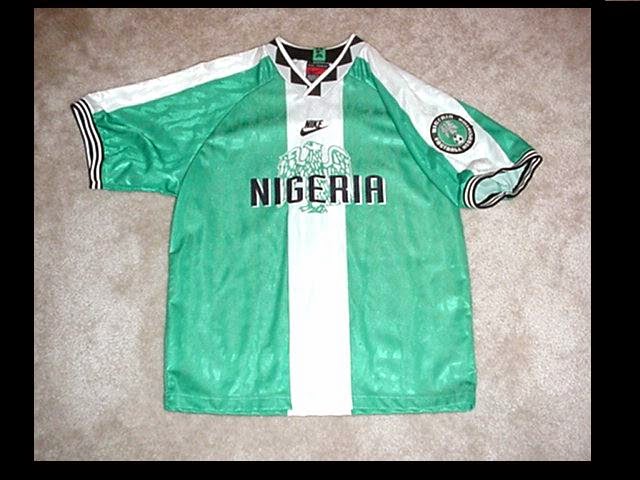 (from the I.S.A. Collection)
Nigerian Star - Samson Siasia shirt from the 1995 US Cup match vs. the USA
Nigeria and the USA have a commonality which will forever live in football history.

When Major League Soccer (MLS) struck an agreement with the (USL) United Soccer League's Pro Division, it made for a unique situation in American Soccer. The newly signed affiliations with selected 3rd Division clubs, allowed MLS players to be loaned to their junior counterparts.
The experience gained by several young players paid dividends by the end of the first year. Sporting Kansas City would go on to win the 2013 MLS Cup with the help of one of those loaned players. 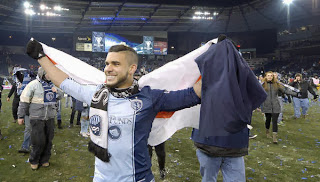 Dom Dwyer basks in the glory of MLS CUP victory
Twenty-two year old Englishman, Dom Dwyer, was loaned to USL Pro club Orlando City for the duration of the 2013 season. He set a new record for most regular season goals (15) breaking the old record of 13 by FC New York's Jhonny Arteaga. 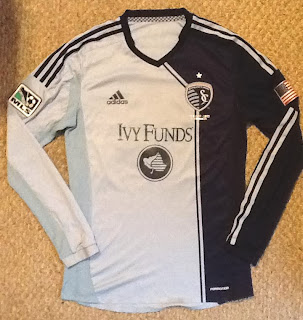 
Dwyer was recalled to Sporting Kansas City at the conclusion of the USL Pro regular season. He went on the score his first goal in the club's Concacaf Champions League competition. This was followed up by his first MLS goal. Dwyer returned to Orlando City for their playoff Championship match where he exploded with 4 goals in their title victory. 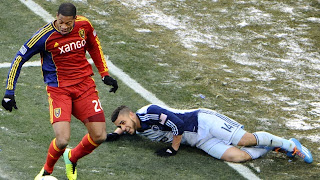 2013 MLS Cup on frozen ground
Upon returning to Sporting Kansas City, he scored the playoff winner to take the Sporting to the MLS Cup Final. 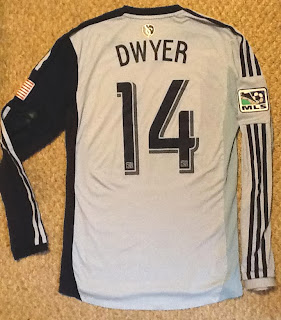 Dom Dwyer 2013 MLS Cup jersey
By playing the 2013 MLS CUP with Sporting KC, Dwyer became the first player in American Soccer History to star in the 1st and 3rd Division Championships in the same season. In celebrating the USL and MLS victories, he also became the first to win both. 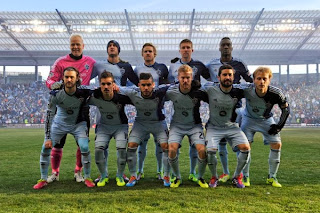 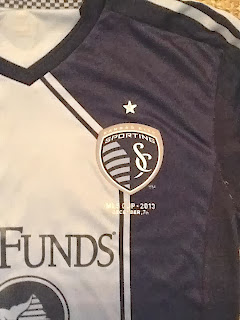 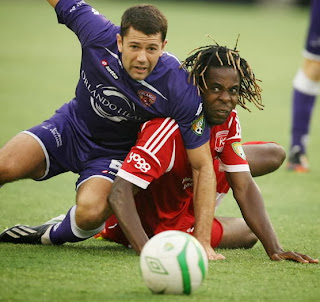 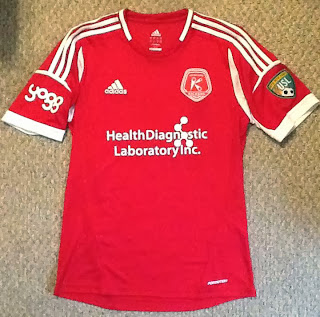 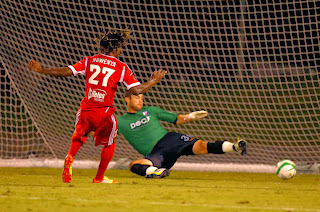 Ngwenya's 10 goals in all competitions led the Kickers in scoring in 2013. Richmond lost to long time rivals DC United on penalty kicks in the U.S. Open Cup. 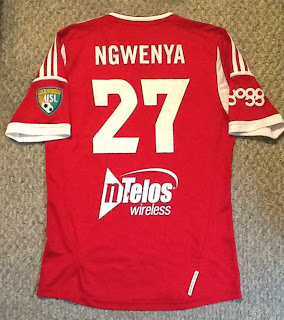 2013 Richmond Kickers - Joseph Ngwenya
The Kickers are one of the most accomplished lower division clubs in the USA. Past winners of the the U.S. Open Cup (1995), Richmond won its 3rd USL title in 2013 and its 5th over all league Championship.
Posted by Chuck's Used Cards at 7:42 AM No comments:

Affectionately called "Wondo", Chris Wondolowski is a record setter. His 72 goals in the last four MLS seasons is the best strike rate since the league began in 1996. In 2012, Chris tied the Major League Soccer record for most goals in a season with 27. He tied Roy Lassiter whose record setting jersey is also here at the ARCHIVES. 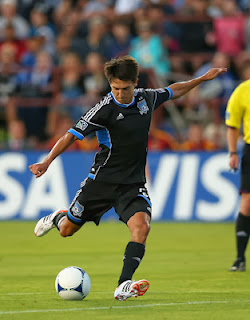 In 2013, Wondolowski led the USA to the CONCACAF GOLD CUP title as the tournament's top scorer with 5 tallies. He was immortalized when his name was misspelled (WONDOWLOWSKI) on the back of his jersey for the match against Belize where he recorded a hat trick. 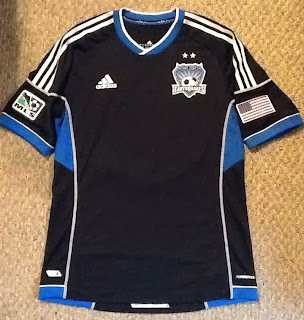 2012 San Jose Earthquakes
The INTERNATIONAL SOCCER ARCHIVES has added Wondolowski's jersey from his record 2012 MLS season. In addition to being the Golden Boot winner, he was also named the league's Most Valuable Player in 2012. 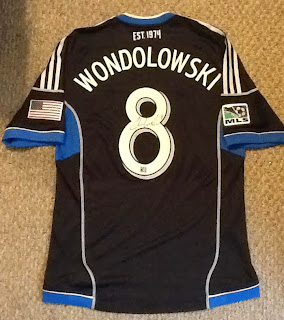 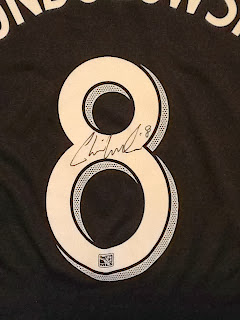 Posted by Chuck's Used Cards at 7:22 AM No comments:

Immigrants have played a crucial role in the history of American Soccer. If there was a water mark where the imprint of the game became more American, it was 1973 and the Philadelphia Atoms. 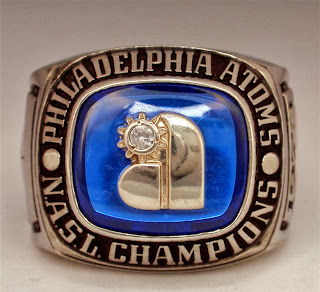 The Atoms were an expansion club in the North American Soccer League (NASL). The previous season the New York Cosmos, a team in its 2nd year, won the Championship. That Cosmos side featured one native born and 2 naturalized Americans in a limited capicity.
Conversely, the Atoms roster had 11 Americans of whom 7 participated in over half their games. Of those, four would represent the US National Team during 1973 World Cup qualifying - Bob Rigby, Bobby Smith, George O'Neill and Barry Barto. 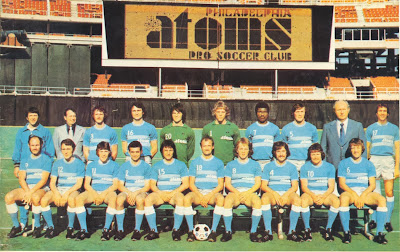 1973 NASL CHAMPIONS
Playing their home matches in Veterans Stadium, they were coached by Pennsylvania native, Al Miller. Miller built the squad around American players, most notably his Goalkeeper Bob Rigby, who played under him at East Stroudsberg State.
Miller would be named the U.S. National Team coach in 1975. However, he would face a tug-of-war with the NASL clubs and the international schedule.
Contrary to popular belief, the excitement of the NASL and its rising stars came before the arrival of Pele' to the Cosmos.
This was evidenced by the September 3rd 1973 SPORTS ILLUSTRATED cover. (see below) 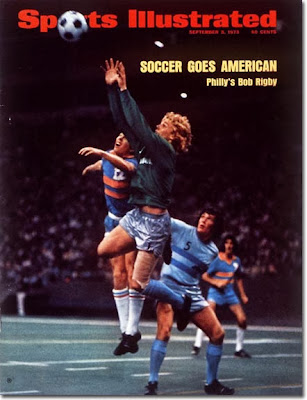 Bob Rigby - SI cover boy.
The Atoms finished with a 9-2-8 record and progressed through the NASL Play-off rounds where they defeated Toronto. In the NASL Final, dubbed The Soccer Bowl, they shut out Dallas to win the title. 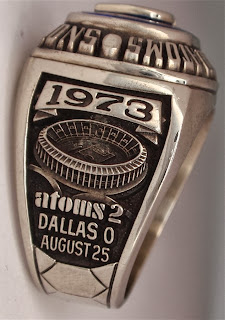 1973 NASL Championship ring.
The reborn North American Soccer League will play its Soccer Bowl Final in November at Atlanta. While there are several Americans in the new league, none are internationals representing the USA.
The Philadelphia Atoms were one of the possible names for the MLS's expansion club Philadelphia Union. The 1973 Atoms provided the most US National players from a Philadelphia club since Walter Bahr and Ed McIllvenny of the Philadelphia Nationals appeared in the 1950 World Cup.
Walter Bahr's sons - Casey Bahr and Chris Bahr also played for the Atoms in the early 1970's before they became NFL place kickers.

Moore and Vermes Inducted Into US Soccer Hall of Fame

The induction of 2 more pioneer players of  MAJOR LEAGUE SOCCER have been selected to the United States Hall of Fame. Although the American Hall no longer exists in a building form, the ceremonial induction takes place in conjunction with other soccer events.
JOE-MAX MOORE
Caps: 100  Goals: 24
Clubs: Saarbrucken (Germany), FC Nurnberg (Germany), New England Revolution (USA), Everton (England)
The son of a former owner of the NASL's Tulsa Roughnecks, Joe-Max Moore was destined to be part of the American soccer scene from childhood. By the time he was old enough for professional football, there wasn't the caliber in place for his talents. Moore moved to Europe and endured the struggles of an American making it in German football.
He did surprising well, and when the MLS was assigning designated stars to the inaugural franchises, Moore landed with New England.  He stayed long enough to score at a rate of better than a goal every 2 games.
He moved to Everton in the Premier League and made over 50 appearances. He finished out his career with a return to New England for one last season. He was art of 3 US World Cup Teams (1994-2002) 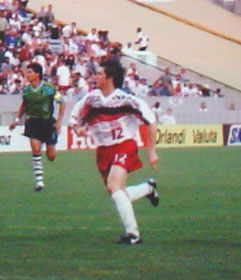 Moore in action in the inaugural 1996 MLS season wearing the above shirt.
(photo ISA)
PETER VERMES
Caps: 67 Goals: 11
Clubs: New Jersey Eagles (USA), Raba Eto (Hungary), Volendam (Holland), Tampa Bay Rowdies (USA), Figueres (Spain), New York Fever (USA), New York MetroStars (USA), Colorado Rapids (USA), Kansas City (USA)
Having to earn his living as a traveler for the early part of his career made Peter Vermes ripe for football management. A very capable striker who became a utility player based on his determination and diversity.
A key player for the USA at the 1990 and 1994 World Cup, Vermes was a Captain in Colorado's(1997) and Kansas City's(2000) MLS Cup runs playing as a defender. The latter resulting in the MLS Championship victory. 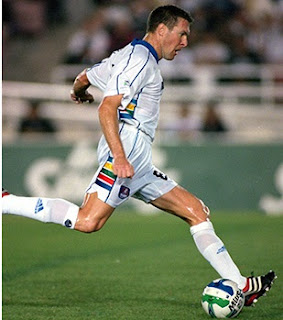 Vermes wear the above jersey as MLS Champions.
It seems the next generation of inductees may just include players who only have played in MLS. The importance of these traveling pioneers cannot be measured in mere statistics, but rather the compliments of their peers.
Both these players are honored by the INTERNATIONAL SOCCER ARCHIVES with their jerseys.

Posted by Chuck's Used Cards at 8:50 AM No comments:

As two significant entities celebrate their anniversaries, one common thread pulls them together.
The Football Association of England is 150 years old while the United States Open Cup (Lamar Hunt U.S. Open Cup) is 100 years old.
The advancement of players from the 17 year old MLS (Major League Soccer) is a viable route for many players to the English Premier League. Arguably the most popular league in the world, the EPL has recruited several dozen players from North America's top league - including Brek Shea, Landon Donovan, Tim Howard, Brad Guzan, Geoff Cameron and Clint Dempsey. 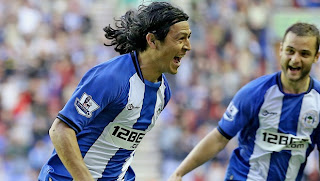 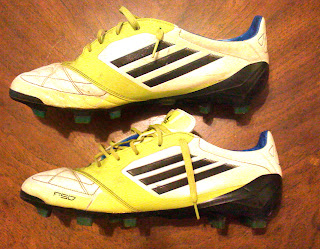 Espinosa's game-worn shoes from the 2012 Cup Final
To our knowledge, only one player - Freddie Ljungberg - has won both the FA Cup (2002 Arsenal) and the US Open Cup (2009 Seattle), although not in consecutive seasons.
There is a short list of pre-war players who have participated in the English F.A. Cup.
None of them have won both the US Open Cup and the FA Cup.
There are several who played in a Scottish Cup Final and the US Cup Final. None have won both.
In the modern era, John Harkes and Kasey Keller have both won the English League Cup and the Open Cup. Harkes was also a runner up in the FA Cup with Sheffield Wednesday. 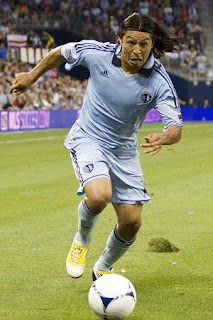 Espinosa in action for Sporting KC wearing "the shoes"
As more MLS talent goes overseas, it is likely that more of them may win a medal or two. but for now, Roger Espinosa's rare double stands out. Congratulations to him !

Posted by Chuck's Used Cards at 6:03 AM No comments: